A downloadable game for Windows, macOS, and Linux

Hey, there. So, this was my attempt at making a game in a week. This game is / will be part of a label of games made "hastily", which is "Shakecan Games". The goal was to make this game in a week, and duplicate the old SNES game Pocky and Rocky to some extent. It went OK, though it lacks a lot (a lot of testing being one of those things it lacks) and went over time by a rather large margin.

So anyway, Pockette Rox is a top-down 2D shooter made with the Blender Game Engine. It's basically just a time attack game, where you see how many points you can get in a single "go". Every 10000 points, you get an extra life, as well. The game progressively gets a bit harder with each enemy you defeat, so you'll eventually die (hopefully eventually and not too soon). You can also play co-op by selecting 2 Player at the title screen. You share a life pool. If one of you end up dying with 0 lives left, then you'll be out for good until your partner can win another extra life.

Oh, and the game comes with the source code (the blend file and the associated assets in the... well, assets directory).

Well, that's the condensed version. Thanks for playing! If you have any feedback, throw it at me via Twitter.

- Just updated it to add in the readme file for Windows (and reverse the controls in there, too. Whoops). :p

I also have a homepage at plain ol' http://www.solarlune.com 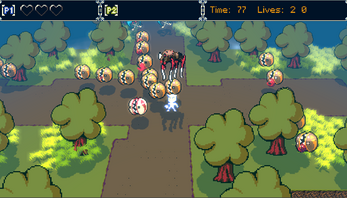 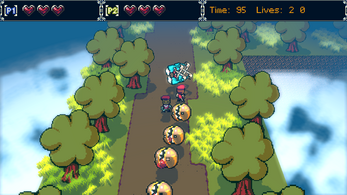