So, it's been a little while since the previous news post; I really appreciate everybody's support and feedback so far! I feel like MasterPlan has been a great program so far largely because of the highly helpful and patient community. Thank you!

I have essentially decided to rewrite MasterPlan from scratch. It should afford me the chance to address some of the major concerns and issues users have had, and I should be able to do so in a relatively short period of time. I would like to retain the core functionality that MasterPlan currently offers and make loading your current projects in the coming update seamless, but this might change depending on time constraints and what the community thinks.

Below I will outline some of the plans that I've been designing and working on.

One major problem that some users have been having has been the inability to use their own language when entering text. This is due in part to MasterPlan not supporting IME text entry very well, meaning languages that require IME input (like Japanese or Chinese) don't work well (or perhaps even at all).

These issues should be able to be resolved by switching MasterPlan's backend from Raylib (which made use of GLFW, which didn't handle IME support very well) to SDL2. This would make it possible to properly integrate IME usage, and using a more up-to-date library should allow me to handle custom fonts more correctly. Text rendering will also be reviewed, naturally, which should hopefully make it more consistently legible.

The visual design of MasterPlan could stand to be updated as well. Currently some Task types share colors in all themes which, while making things cohesive, also makes it hard to tell the difference between Tasks at a glance. Most Tasks aren't resizeable, either, which is a bit of a shame. 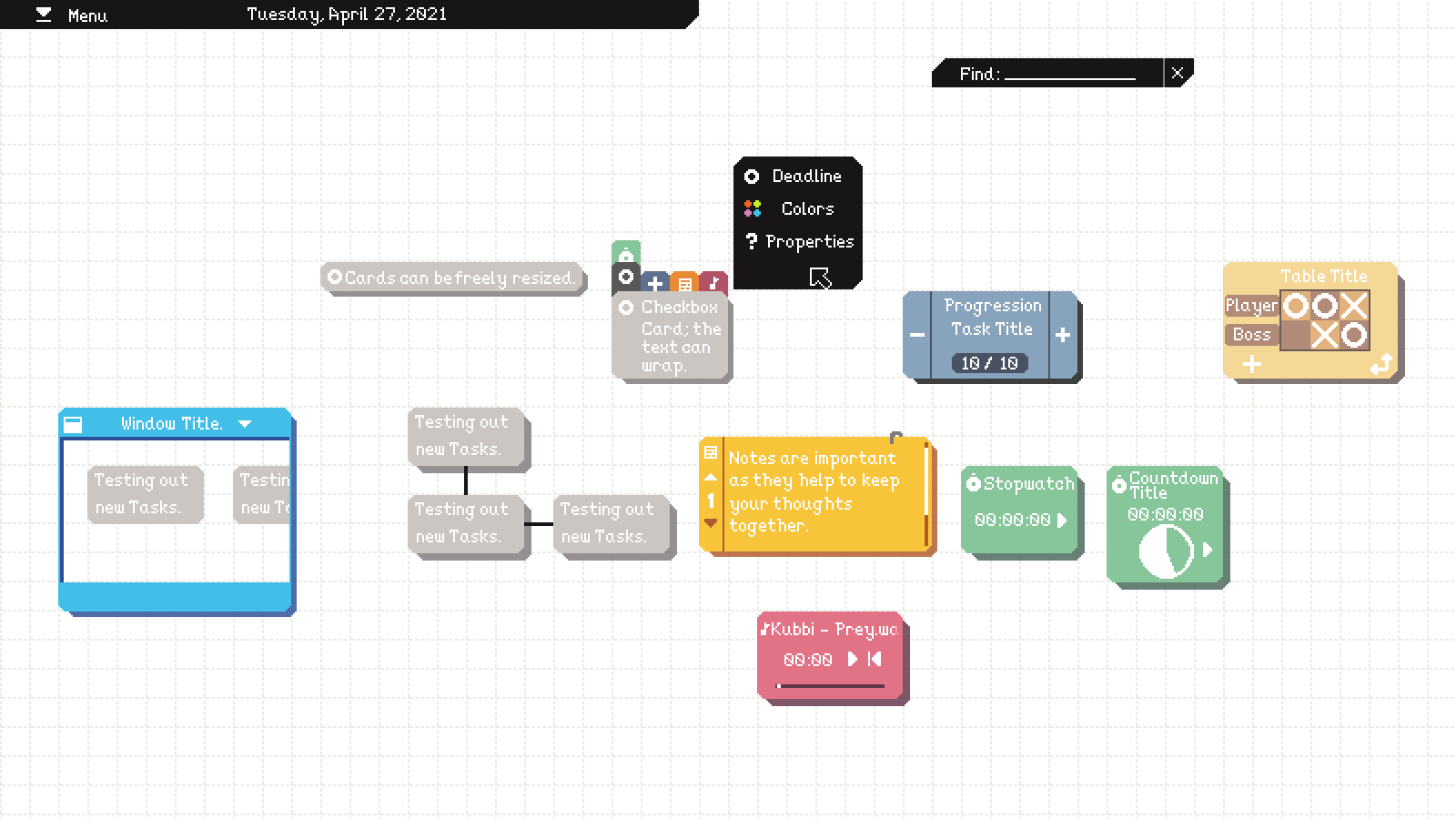 So, here's a mock-up for the next design of MasterPlan, featuring a much stronger and cleaner visual design. Note that not every element, Task type, or feature in MasterPlan currently is shown in the mock-up. I made it just to show the general visual design language and an idea of what I'll be aiming for graphically. Tasks will now be called Cards to reflect that not every Task is inherently completable. Cards should be inherently designed to be resizeable to handle text wrapping cleanly, rather than the user needing to manually enter line breaks.

Important elements (like Card type, titles, or text) should be able to be edited right from the overview, rather than having to open an additional window to do so. Cards should also have a higher resolution, making higher resolution fonts less of a pain to work with; if you don't want to use the default, pixellated font, you should be able to change the font and have MasterPlan still look good.

Themes will still work like they currently do (being user-customizeable and MasterPlan coming with a selection of themes), though it might be possible to improve on this front. I've been thinking that perhaps themes could be implemented as human-viewable image files that users can simply edit to actually see the changes they're making; that would make sharing themes as simple as sharing images, and you can preview what a theme looks like before actually viewing it by simply viewing the image. It's an idea, anyway.

While Boards are currently [i]alright[/i], a problem with them is that they separate the elements they contain from the surrounding context of the plan. For example, a Board that houses info about gameplay systems is fundamentally separate from another Board, even if it visually shows or mocks-up those same gameplay systems.

An idea to resolve this is to implement Folders (or Boxes, or Windows, or something; the exact name is tentative). You can place them like other Cards, but also place Cards in them as well to group them together. By doing this, they retain the spatial context that connects them to some outer context (a group of images showing a townspeople's style can reside in a folder in a location of the board dedicated to that town, for example).

These are all tentative ideas, but also things that I feel like will make the program even better than before. It will take time to develop these ideas more fully, but I'll keep working on designing and improving upon some of these ideas. If you have any feedback, please feel free to submit it!

As before, I greatly appreciate any suggestions you can give to make MasterPlan even better than ever.

I'm a big fan of this idea! I hope your effort pays off. Godspeed!

Hello! Thanks a lot, I really appreciate it~

Exciting! Can't wait for the great changes of the already great tool.

Just a suggestion though: maybe move it to SDL2 and fix fonts first and then start the redesign and all that? Here's why: some users like exactly what they have at the moment and that's what they've paid for. Changing the core tool's elements design will change everything for the end user.

Having the current version with fixed major issues (like the fonts) and stopping its support along with an announcement after would probably be a smoother move from the customers' perspective, keeping the built trust. Then just do whatever was initially decided already and everyone's happy in the end.

That being said; I will support you and whatever you do with this tool. Good luck with the new code and I hope you will have a lot of fun with the new riddles :)

Hello! Thanks a lot, I really appreciate your feedback and ideas here.

I'm uncertain about moving it to SDL2 and fixing it up before starting the redesign because it seems like it might take too much time to pull off. I appreciate that some users like what they currently have, but some users also aren't able to effectively use what they have, and improvements are generally good. I think it being an early access / indev product means that you're not only buying what it is now, but also its potential.

While it is certainly true that I can't please everybody, ideally, nobody should be upset with MasterPlan a year from now in comparison to it as it stands today. If I kept one version back, people would have to choose, and I might have to end up supporting effectively two codebases because of security vulnerabilities, feature requests, etc. It seems wisest to put my energy into trying to cover all my bases with the design update, and try to keep everybody happy with the result moving forward.

Thank you for your feedback, again!

I only started using MasterPlan like a couple days ago but I love it already. I'm excited to see it become even better tho. Keep up the good work!

Fantastic to hear - thanks a lot! I hope to keep working on it and make it even better in the coming months.