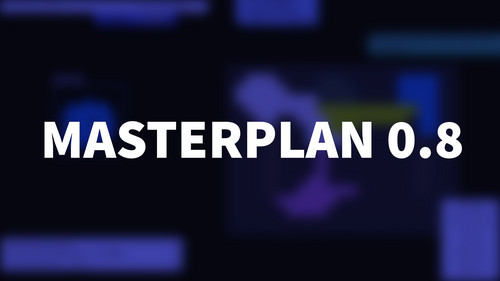 Hello! Here's another update for MasterPlan, bringing it up to v0.8.0 Alpha 2! Huzzah~

Let's get right into it.

One major new feature in Alpha 2 is the ability to create joints in lines. This has been a fairly well-requested feature, and I'm a bit excited to have finally got it working acceptably. It should help to make using lines more comfortable and help make the flow of your project easier to visually comprehend.  To add joints, simply click on the circle in the center of a line / between existing joints, and then drag it around. You can delete a joint by double-clicking on it. Joints move with their Cards if both Cards at the end of a line are moved together, as well.

You also now have the ability to link Cards to indicate dependency. Specifically, lines indicate that the starting card depends on any linked cards. In the GIF below, the main Checkbox Card entitled "Complete the Challenge" is complete only when its three linked Cards are. As can be seen, this also works for Cards in a list that depend on completion of their children. Dependent cards changes icon to show this, going from the normal circular icon to a set of squares.

Unfortunately, while lines have been improved, I had to change how they are saved and loaded, which means that lines saved in the previous 0.8 alpha will not load properly in this one (though the project should load properly otherwise). Apologies!

Another, more minor, new feature is the ability to resize multiple Cards at the same time - simply select multiple cards, and then resize one - the others will follow.

As you can see in the above GIF, another minor change is that now, the line for editable text on Cards is drawn beneath the first line of text. This means that you can easily make a title on a Card by simply typing your title, and then creating a newline underneath for any descriptive bits. 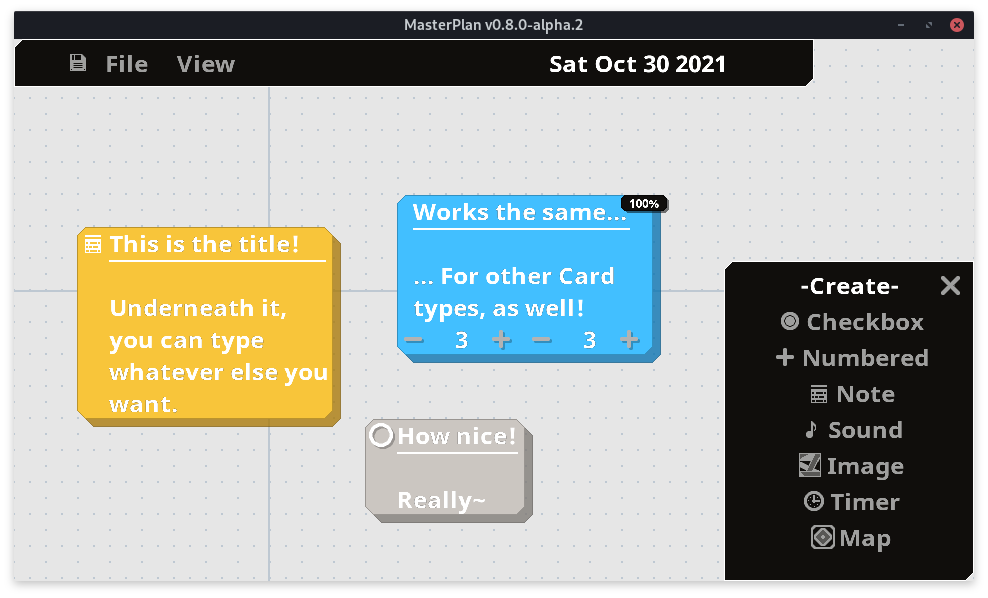 Custom fonts were also re-implemented - simply browse to and select a custom .otf or .ttf file to use it in MasterPlan. Note that it might not look right unless you restart MasterPlan after changing the font (for now). There's also bugfixes including panning no longer feeling like garbagio and Windows no longer crashing when loading JPEG files. Hooray~!

Installation: To install the v0.8 alpha, simply select the appropriate option when installing MasterPlan. If you've already installed MasterPlan v0.7.2, simply right click on MasterPlan in the itch app, choose Manage, and then click Install on the v0.8 update for your platform.

Anyway, let's take a look at the detailed changelog:

Welp, that's about it. As an aside, ideally, I'd like to stick to updates every week or two now - I feel like an update every week would be great, but giving me an extra week in case something comes up  (either in real life or in development of MasterPlan) helps to give me some breathing room to deal with it.

Anyway, that's it. Thanks a lot, as usual! - SolarLune